This post is dedicated to the places I’ve been that I probably won’t be going back to.

I see a lot of Instagram foodies out there that sugarcoat everything.  Everything they post is “good”.
For the record, I am not going to sugarcoat shit. Not everything is going to taste good, and I’d rather be the barer of bad news, than give a fake bullshit opinion.

Preface: my “hometown” entries will feature restaurants within a 40 mile radius of Detroit.

When this place opened up last year, it was one of the most talked about restaurants in Detroit.
Boy, I tried sooooooooooooooooooooooooooo hard to support it.
I’ve had almost everything on the menu….

This past weekend was the last and final time I will be going there.

I wanted so badly to find a new ramen joint that was close to home, with new and creative flavors….but this wasn’t it.

It’s a cool place, and the menu is very diverse.  They try to put a Detroit spin on the ramen they serve, and the ideas are awesome, but the execution is sub par.

Because the restaurant had just opened when I first went, I figured they just needed time to really develop their flavors.
I excused their extreme saltiness and amateur attempt….so I gave them time and tried again.

Close, but no cigar.

I had seen a lot of positive posts on Instagram promoting the restaurant and pondered if their execution had improved.

Finally, after months and months of distancing myself from this joint, I decided to give it another go.

I’ve conceded that I will never leave satisfied.  It’s either too salty, not salty enough, or the flavor just doesn’t taste right.

What I WILL commend them on is introducing me to this amazing Rose Lemonade!  This drink is the bomb dot com. Legit, the best thing they have to offer. 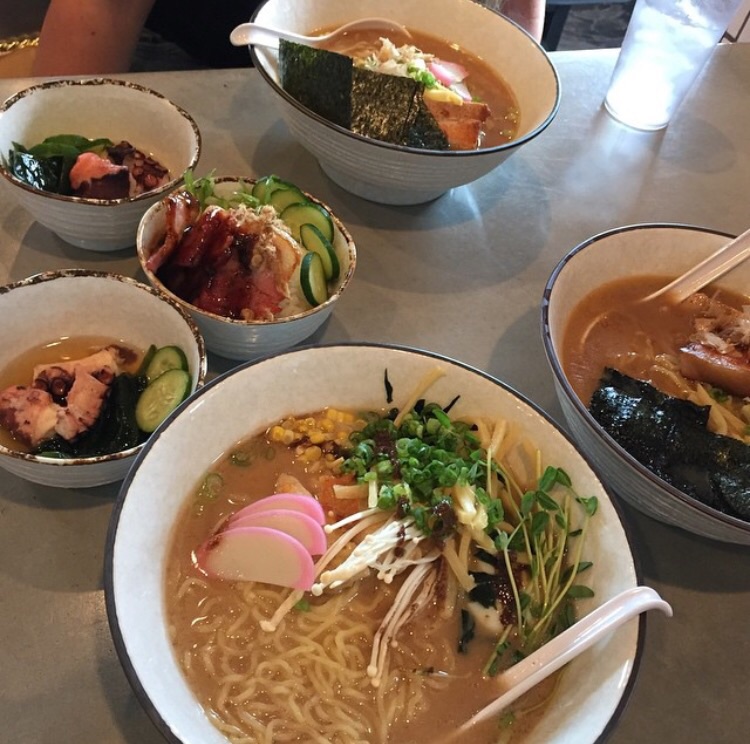 Pictured is their Southwest Ramen, a Mexican spin on the Japanese classic.
#Fail

It literally tasted like they dumped fajita seasoning into some water and called it a day.  I had to add a ton of soy sauce to it because there was no salt at all.  Those roasted carrots were DISGUSTING and frankly, inedible.

My husband ordered the Korean Ramen…I think it might have been the Bugolgi bowl….I can’t remember what it was, but THAT tasted like diluted Gochujang sauce.  It was so thick and spicy, I don’t even know how he was able to eat it. 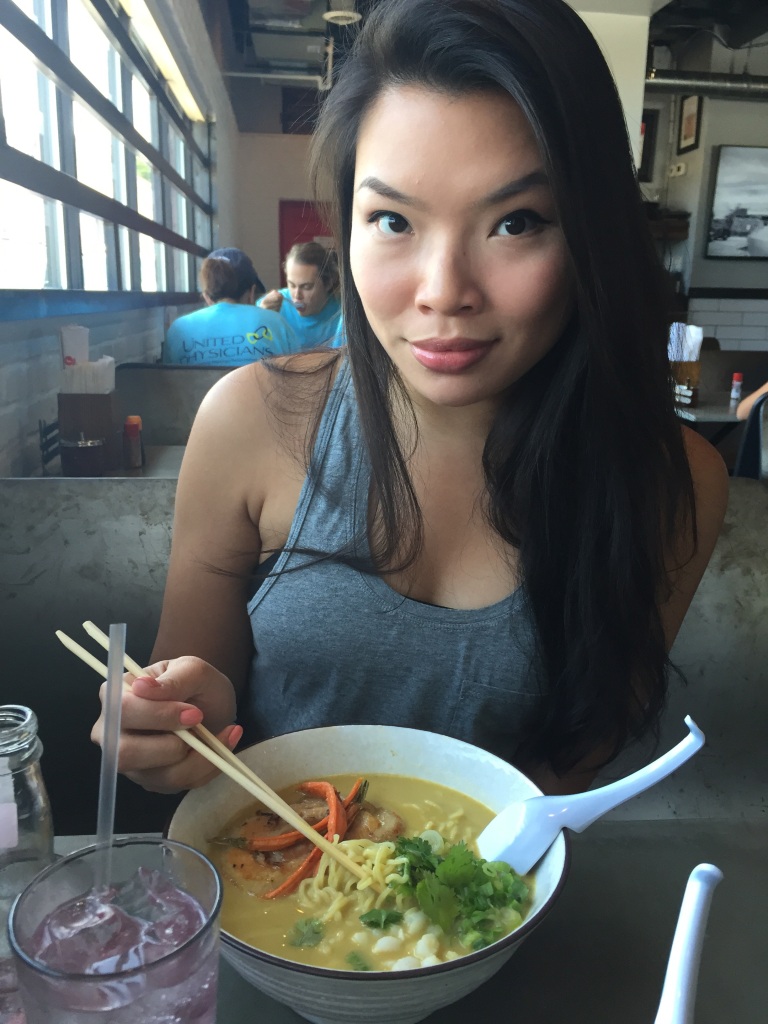 This, folks, was my happy “before” picture. You don’t even want to see the face I made after I took my first bite….

Sarap in Tagalog means “delicious”.  I’ve had a lot of very close Filipino friends throughout the years, with my best friend being Filipina (might I add, she is a chef at a very prestigious athletic club).

This was my first pop-up experience, and was super excited when I ran into a bunch of my Filipino foodie friends.
The menu consisted of some classic dishes that should resonate with anyone who is familiar with Filipino food….

The garlic shrimp skewer they served was a “thank you” for attending the pop-up. This was really tasty, and I was excited after this because they started off on a good note! 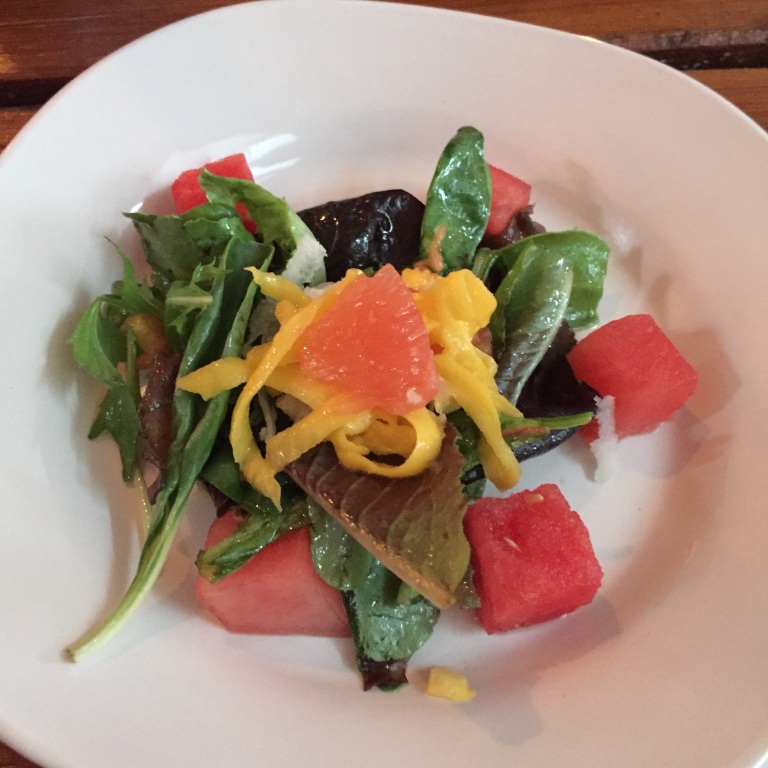 Summer salad
Unnecessary.  Not needed. Pointless.
Nothing about this salad was complementary to the menu.  It did not showcase anything “Filipino”.  This is where it started going downhill.

Bulalo [boo-Lah-LOW]
This is the dish that confused all the Filipinos at my table.  One of the chefs came out to introduce this dish as a classic comfort food for Filipinos….a bone marrow soup that is stewed for hours with love….what we got was not reminiscent of that description.  I can appreciate a deconstructed rendition of a classic dish…a “new age” version, if you will, but I didn’t find this dish to be thoughtful at all.

This version of Bulalo was not comprehensive. There was not nearly enough marrow to spread on that tiny piece of bread, which is unfortunate because it was so delicious!  The polenta underneath it didn’t make too much sense, but alone, it was also very delicious.  Behind it sat some cooked cabbage and beef….COMPLETELY IRRELEVANT.  It had no flavor, and downgraded this dish.

Sisig [SEE-sig]
Can I tell you how much I love sisig? Everything it represents screams comfort food. Crispy fried pork bits, with ginger, garlic, and spices….salty in flavor, and complementary to a nice cold beer.

Excitement overwhelmed us….and then we tasted it.  EVERYTHING about this plate is wrong.
Garlic fried rice, a staple in every Filipino home, was butchered.  HOW DO YOU MESS UP GARLIC RICE!?!
I was mortified at the chalkiness of the rice; I couldn’t tell if it was stale, or if it was overcooked, but it was hard and crunchy.

Speaking of crunchy, which sisig typically is, the pork was everything BUT. It was ridiculously spicy, soggy, and for whatever reason the chefs decided to add chicken liver pate to it. WHY would anyone do that!?

Shock and disappointment ensued.  The egg was not runny, as it should have been…the girl next to me received a cold dish, everything was just bad.

I suppose conceptually, it could have worked. It was just a mess of a plate, and none of my Filipino friends were happy about it.  The chefs got it wrong; they completely messed up a classic dish that was relevant in everyone’s lives.

The final course, which was Halo-Halo, an iced dessert, failed miserably. I don’t even have a photo of it because my experience was so poor with the previous courses, I just gave up.  Halo halo is typically ube flavored ice with coconut, red beans, and other sweet and delicious condiments.  What we got was melted iced in what tasted like Special K with milk and red beans.

This was the only pop-up Sarap did this year; they announced their plan to do another exclusive event in the near future…I’m disappointed to say that my friends and I will certainly not be attending, nor would we recommend it to anyone else.

This restaurant is right in the heart of downtown Detroit, located in the Motorcity Casino.

The ambiance was very nice, and the view is spectacular. My husband brought me here for my birthday this past Friday, and we tried their 7 course tasting menu.  At $95 per person, I don’t think I was impressed enough to come back.

They keep their tasting menu a secret; it’s chef’s choice of what they decide they want to prepare that day.  The fact that there was no hard copy of the menu kept it interesting; it makes it so you couldn’t set your own expectations of the food. 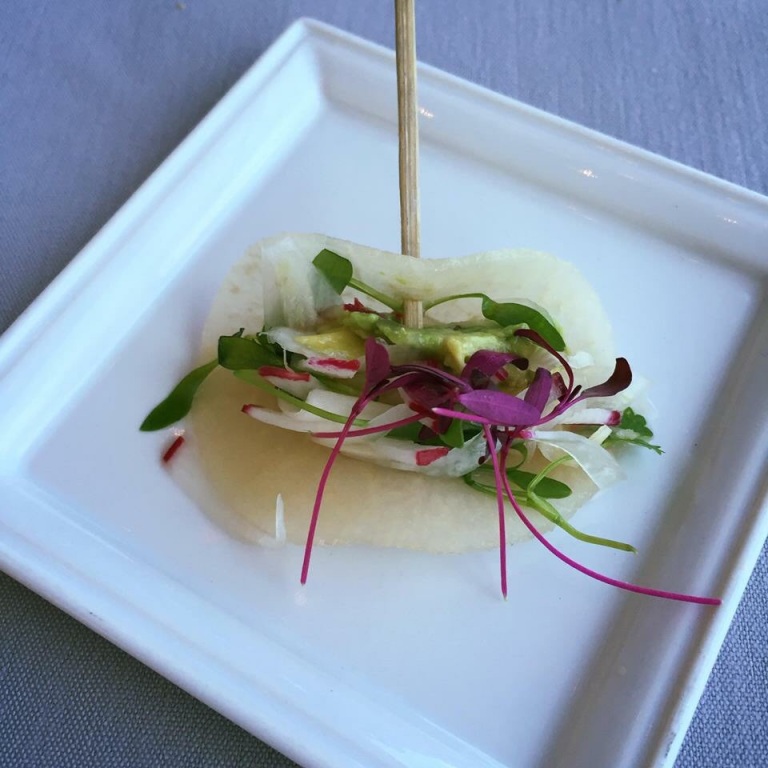 First course: Foie gras dumpling with pickled cabbage and spicy peanuts.  The peanuts were underwhelming and they certainly were not spicy…not a relevant part of the dish.  The dumpling was phenomenal!  The cabbage was all too sweet…the sweetness suffocated the tastiness of the dumpling.  I would have preferred a light berry reduction drizzle, something tart yet sweet, and not over powering.  This course was just not cohesive in my eyes. 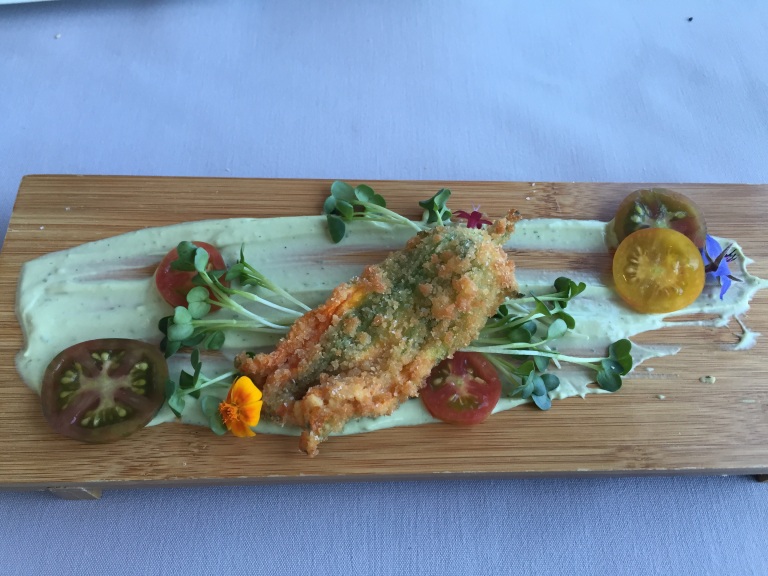 Third course: Roasted veggies in a beet nest, smoked herb creme fraiche sitting on a piece of smoked cedar.
This was our favorite of the savory dishes…the most creative dish for sure. HOWEVER, the creme fraiche, my husband and I both agreed, tasted like a really rich french onion dip….you know, like chip dip.  The smoked piece of wood underneath was a nice touch, as it was so fragrant upon arrival…but that scent quickly dissipated, and was no where to be found after the first two minutes.

Fourth Course: S’mores.  Homemade marshmallow with a graham cracker panna cotta, sitting on chocolate with a side of s’more flavored ice cream. This is probably one of the best desserts I have ever had….EVER.  I was extremely pleased and impressed with how amazing this was….but as the 4th course?  Their reasoning behind putting a dessert in the middle of the meal is because they said they serve according to heaviness of the dish.  I can understand that, but regardless of how light or heavy something might be, I always prefer dessert last.

Fifth Course: Crispy chicken, waffle puree, with a compressed watermelon. WTF?
This course was wrong on so many levels.  The waffle stuff, whatever you want to call it, tasted like waffle batter.  The chicken was not moist, it wasn’t seasoned well, and the crust was tasteless.  The compressed watermelon was bland.  I hated this dish.

Palette Cleanser: Sorbet with olive oil and wasabi?  Actually I don’t quite remember all the specs….I didn’t care for it. 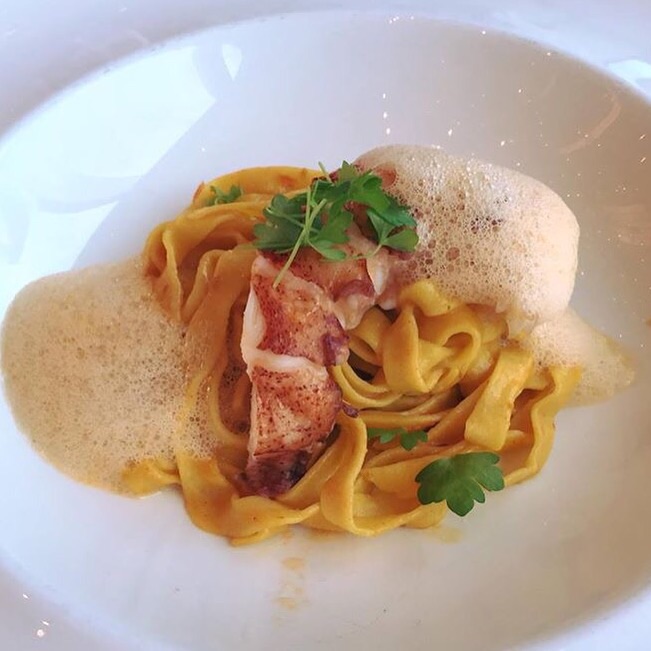 Sixth Course: Maine lobster pasta. I think it was saffron spiced pasta….with a shrimp foam.  If you read my previous post, you might remember that I HATE foam. The lobster was smoky and very well executed, but the pasta lacked salt. The dish was okay, the lobster made up for it.

Seventh Course: Steak with corn puree, topped with black truffle shavings.  The steak was awesome. I forget what cut of beef it was, but it was very lean so I suspect it could have been filet. The corn stuff I didn’t like.  It was too sweet, and almost tasted like a corn ice cream.  I wanted it to be savory to complement the steak and truffle, alas, I just couldn’t stomach the sweetness.

Overall, my experience there was pretty great…but there was no “wow” factor for me there.

Stay tuned for my hometown FAVORITES, up soon!